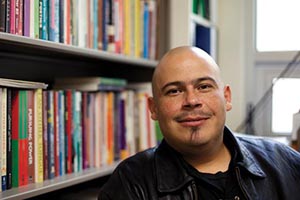 Dr. Roberto D. Hernández (Xicano) is an associate professor of Chicana and Chicano Studies at San Diego State University and an actively engaged, community-based researcher, scholar, teacher and writer. Born in Mexico, but raised in San Ysidro, within blocks of the busiest port of entry in the world, the U-S///Mexico border has figured prominently in his intellectual, political and professional development and commitments. He earned a Chicana/o Studies Honors BA (with an emphasis in Political Theory), as well as Masters and PhD in Comparative Ethnic Studies (Black, Native and Chicana/o Studies) from the University of California, Berkeley, where he was also a Researcher with the Center for Latino Policy Research and a Research Fellow at the Institute for the Study of Social Change. He was previously a Visiting Researcher in the Center for Black Studies Research and the Chicana/o Studies Institute at UC Santa Barbara, where he taught in both Chicana/o Studies and Black Studies.  Dr. Hernandez also coordinates several advanced international research institutes for junior scholars: Decolonizing Knowledge and Power (in Barcelona), Critical Muslim Studies (Granada), and Latin American Decolonial and Feminist Thought (Mexico City).

Dr. Hernández’ research, publications and teaching focus on the intersections of colonial and border violence, the geopolitics of knowledge and cultural production, decolonial political theory, social movements, hemispheric indigeneity, masculinity and comparative border studies. Specifically, he teaches courses on the U-S///Mexico border history, theory and contemporary issues, Chicana/o and border folklore, Community Studies, and racialized/gendered captivity and incarceration from colonialism and slavery to the prison industrial complex and migrant detention centers. He co-edited the anthology Decolonizing the Westernized University: Interventions in Philosophy of Education from Within and Without (Lexington, 2016) and is the author of Coloniality of the U-S///Mexico Border: Power, Violence, and the Decolonial Imperative (Univ. of AZ Press, 2018). He has served on the governing board of the National Association for Chicana and Chicano Studies (NACCS) and was involved in the writing of a NACCS Amicus Brief at the height of the legal battle over the attempted banning of Mexican American Studies in Arizona in 2010. Lastly, Dr. Hernandez is an accomplished translator of important scholarly works and has several ongoing translation projects under way.